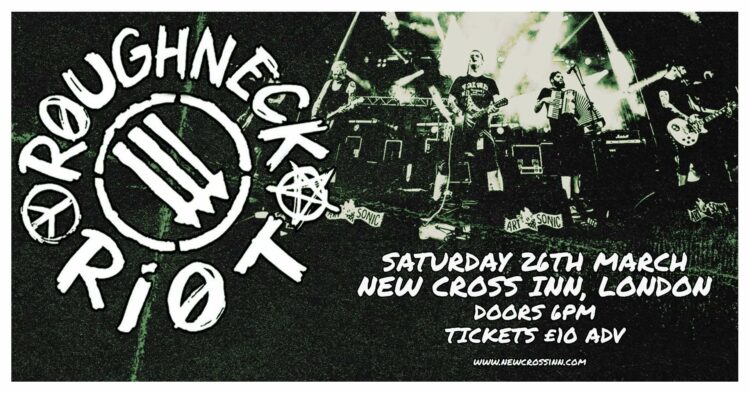 Roughneck Riot are coming to London!

By no means a traditional folk-punk band, Roughneck Riot have been making their mark on the underground punk scene since 2005 with their heavy, melodic sound. Drawing influence from a menagerie of folk, punk and hardcore bands and praised for their high octane live performances, they are one of the most unique and exciting bands in the UK Punk scene.

Consisting of 6 bodies and a load more strings, a bunch of buttons and a few drum sticks, Roughneck Riot have built on the messy beginnings to release 'This is Our Day' and 'Out of Anger', both respectively marking their place within a vibrant and energetic punk scene. After a spell of recording and recuperating, and a further enforced spell of quarantine, Roughneck Riot are restless and snapping at the ankles, and their first ever gig at New Cross Inn is destined to be one for the ages.

“The Roughneck Riot generate a steam-rolling wall of melodic noise that hits you like a right hook. This is contemporary hardcore folk driven by youth and boundless energy. If this lot don’t make you smile then you’re surely deaf or dead!” - R2/Rock’n’Reel Magazine