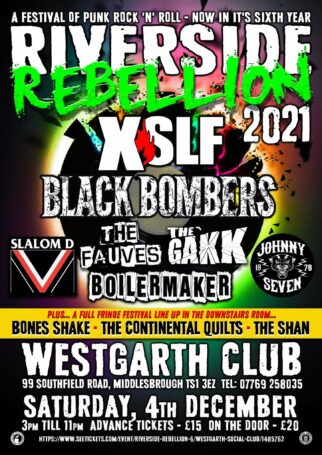 Riverside Rebellion 6 complete line - up for the upstairs room as follows:

Xslf started in 2013 when Henry Cluney and Jim Reilly met up again after years of not seeing each other. Since then they have been writing and recording original music which is being well received. Ave Tsarion is the bass player and a big part of the setup including writing music.

Unfortunately Jim has had to step down for health reasons on the advice of his doctor.His health is more important than gigs and we really wish him back to full fitness soon. On drums we now have Glenn Kingsmore. Glenn is the drummer for legendary Belfast band The Defects - Survival was a great song. Anyone who has seen him play knows what a powerhouse he is!

The Gakk were one of those bands we saw at Rebellion in Blackpool last August and made a big impression on us, enough to seek them out about playing the Westgarth.

The Gakk are an original five-piece punk band from Dundalk, Ireland. Taking influences from the classic punk sound of the '70s (The Clash, SFL, Sex Pistols, Subhumans, Dead Kennedys, Crass, Buzzcocks, Conflict and Rancid) this band are the real deal, touring extensively across Ireland, leaving fans breathless wherever they play with their melodic street-punk & highly energetic live performances.

Johnny Seven originally formed in 1978 after seeing The Rezillos at Middlesbrough Rock Garden. They reformed in 2012 supporting The Rezillos at Stockton's Georgian Theatre and have also supported both The BellRays and The Godfathers at the Westgarth in Middlesbrough: https://www.youtube.com/watch?v=vmHXT3x3L-8&list=PLP1ttRHAbs97BnP-Npa00MgfeS2-H0LR1

Boilermaker come from Darlington, County Durham, and originally played our Lee Brilleaux event last year and will be playing this year's too in May with several other bands.

The Fauves are a punk band from South Shields formed 1978 after the split of the original angelic upstarts.The band reformed in 2016 and released 2 CD albums Routine Kills and Back of World. They also supported the Turbulent Hearts at the Westgarth back in August 2019. They have a sound very similar to The Filth.

Slalom D from Sunderland will open the show like they did in December 2019 when they opened for 999, Duncan Reid & The Big Heads and The Bermondsey Joyriders.

They are an incendiary mix of explosive guitars, juggernaut drums and politically-fuelled lyrics. A relentless onslaught of controlled chaos and sinew-stretching harmonies, Slalom D capture the essence of 77, chew it up and spit it out in the face of complacency, bigotry and intolerance: Slalom D are a punk rock band

There will be a full fringe festival taking place downstairs curated by Ryan Pilot of The Shakin' Nightmares. The line-up will be announced later on in the year.