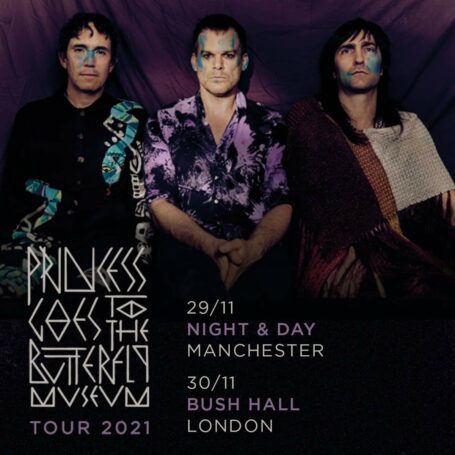 Princess Goes to the Butterfly Museum’s captivating self-titled debut is evidence of that. Recorded spontaneously for the sheer joy of creation and collaboration, the EP showcases what happens when three consummate artists commit themselves to fully inhabiting the present, working together without boundaries or restrictions. The songs here are adventurous, with bold, experimental arrangements that incorporate everything from distorted synth rock and ethereal electronics to dreamy folk and R&B. It’s an intoxicating mix, one that transcends genre as it draws equal strength from the remarkably disparate backgrounds of its progenitors.

While Hall may be the most recognizable face in the band (known for his work on the HBO drama Six Feet Under and the Showtime's series Dexter), his bandmates boast similarly prodigious resumes. Yanowitz began his career playing drums in The Wallflowers before going on to co-found indie stalwarts Morningwood and work with artists as varied as Natalie Merchant, Yoko Ono, Andrew W.K., and Billy Bragg & Wilco. Keyboardist Matt Katz-Bohen, meanwhile, spent the last decade touring and recording with Blondie, in addition to working with the likes of Boy George and Cindy Lauper.
-------------------------------------

“The band explores electronics from multiple angles. From celestial Beach Boys vibes to soulful electro-pop grooves and the foreboding and whimsical, Princess Goes To The Butterfly Museum are creating intersecting hybrids of introspective dark pop and contemporary readings of post-punk. At the center of it is Michael C. Hall’s considerable vocal/psychic range.” Alternative Press

“Throughout his career, Michael C. Hall has shown a natural flair for versatility. In his band, Princess Goes To The Butterfly Museum, Hall’s impressive vocals join the instrumental works of Peter Yanowitz from The Wallflowers and Matt Katz-Bohen from Blondie. Together, the supergroup fuses styles like classic rock, funk and electropop.” Paper

“Don’t be fooled by the fanciful innocence of Princess Goes To The Butterfly Museum. Though cultivated from the spirit of lively ‘70s bands, fantastical synthesizers, driving percussion and falsetto vocals, concepts like catastrophe-spurred romance and existential anxiety make the band and its debut LP, ‘THANKS FOR COMING,’ veer closer to the likes of the ‘Twilight Zone’ than Disney World.” American Songwriter
-------------------------------------
https://linktr.ee/princessgoesofficial