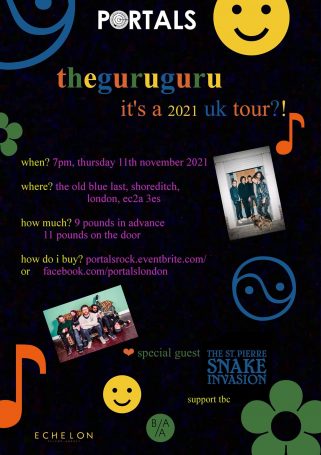 Once again we are thrilled to be bringing The Guru Guru to London!

Unquestionably punk, undoubtedly hardore, willfully melodic, destructibly rapturous. The Guru Guru have torn up many a Portals stage and this time we’re having them at The Old Blue Last.

With their second album they are still digging deeper in the confusion of their music and their non-stop madness. The power of nature over reason'. After crossing musical and personal boundaries with the newest album ‘Point Fingers’ with the multicolored straightjacket singing and the feverish guitars became an album that defined the band.
“I've never been so sincere before” - Tom The Bomb. Instead of being in the insane asylum, you are now the owner of the asylum and we give you a warm welcome to fold in an original way.

They have played over 150 shows over the past few years including rcTanGent (UK), Portals (UK), Ment (SLO), Monkey Week (ESP), Rock Herk (BE), Sziget (HU), Pukkelpop (BE) festivals and we look forward to hosting them again at Portals festivals in 2021.

The St. Pierre Snake Invasion perfectly occupying the space The Guru Guru leave behind with their expansive form of hardcore. Intertwining elements drawn from many aspects of experimental music far beyond what you’d expect from a hardcore band.

Their 2019 album Caprice Enchanté made it into our collective Portals top 20 albums of the year and they describe it themselves as “A struggle, a battle, a veritable nightmare, a challenge overcome, a joy, a wonder, a labour of love, a triumph” and we couldn’t agree more.

Expect this show to be messy. We wouldn’t have it any other way.