MiG 15 plus Weimar and The Last of the Fallen Angels 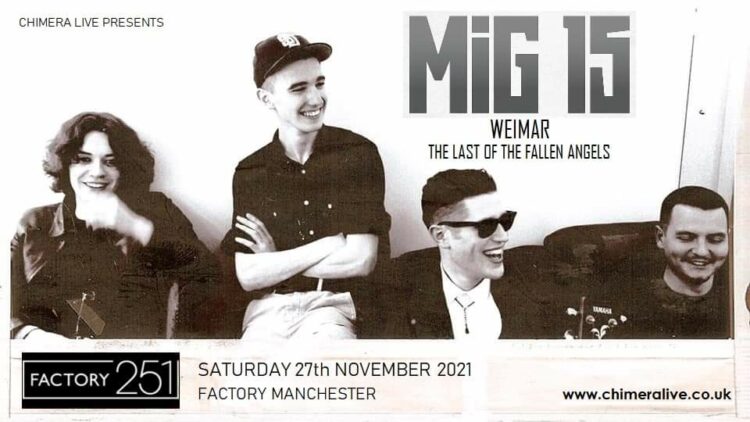 As a concept, MiG 15 began when James McCluskey was a teenager growing up in San Diego, inspired by the fighter jets coming and going from the military bases there. After finishing school, he moved back to Liverpool and was introduced by Ann Heston (wife of the late Alan Wills - Deltasonic) to the former Dustland singer, Adam Bray, which is when things really started to take off.
It wasn’t until 2019, after nearly two years of writing songs that the pair felt they were ready to unleash their timeless blend of powerful electro indie upon the world. After some experimentation with the live sound, James Morris on guitar, and Martin Gordon on Drums, were added to the complete the line up.

Already working with producers such as Rich Turvey of Blossoms fame, and Tord Knudsen from The Wombats, and with a heavy touring schedule coming up, it won’t be long until they are playing to sold out crowds and festivals globally.

Combining a range of influences and naming themselves Weimar after the German Weimar Republic of the 1920s in which experimental art, music and cabaret saw a boom period, the band debuted on the Manchester live circuit in its original incarnation, featuring Johann Kloos (The Sandells, Erick) on guitar, in late 2016.

Weimar combine an eclectic range of influences, with their songs containing elements of Art Rock, Post-Punk, Cabaret, Chanson, Prog Rock, Funk, Alt Folk, Gothic Rock, Music Hall and Dark Circus. Lyrically they cover themes of the dark side of culture and human nature, drawing on a socio-political awareness as well as historical inspiration. In the spirit of the Weimar Republic itself, the emphasis is on the need for freedom of expression and rebellion in the face of political and social oppression. In the current turbulent political era, which has already sparked talk of ‘Weimar Britain’, this approach has a profound relevance to contemporary culture.

THE LAST OF THE FALLEN ANGELS