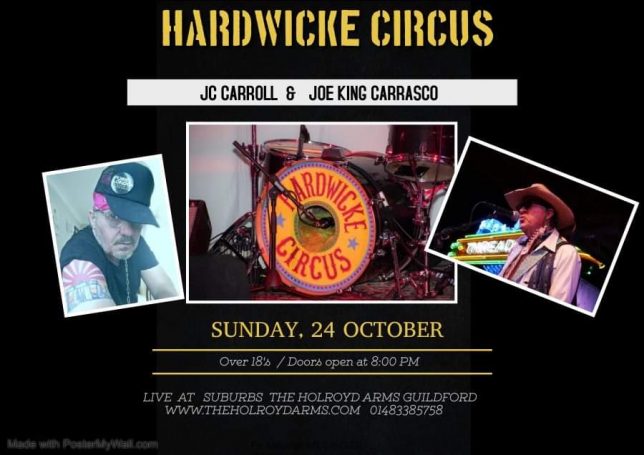 HARDWICKE CIRCUS
"Meet the six-piece band who are not only turning heads with the confident glide in their stride, they're literally bulletproof" - Paul Sexton (Sunday Times)

JC CARROLL
My name is Jean-marie “JC” Carroll I made my name in Punk Rock in the 70’s with The Members, writing Sound of the Suburbs, Offshore Banking Business and Working Girl. After 40 years I still do shows with The Members. I have scrored soundtracks for Movies, made Videos and released Solo Albums as well as continuing to record with The Members

Joe King Carrasco Biography
Known as the King of Tex-Mex rock and roll, Joe King Carrasco, creates a stylistic borderland of pop rock and Latin rhythms. His cross-cultural stew blends cumbias, vamp, salsa, surf, reggae, blues, and Latin-tinged polkas. It has been a long road, coming from Dumas,Texas, a dusty little west Texas town where in the 7th grade he started playing in garage bands. In his late teens, he was often lured to the beaches in Southern Mexico and was drawn to the Mexican music he was hearing around him. Back in Texas he joined up with future members of the Texas Tornados and formed a band known as Joe King Carrasco & El Molino and in 1978 released his 1st LP titled “Tex-Mex Rock & Roll”. Somehow this record made its way to England and was re-released by Big Beat Records.