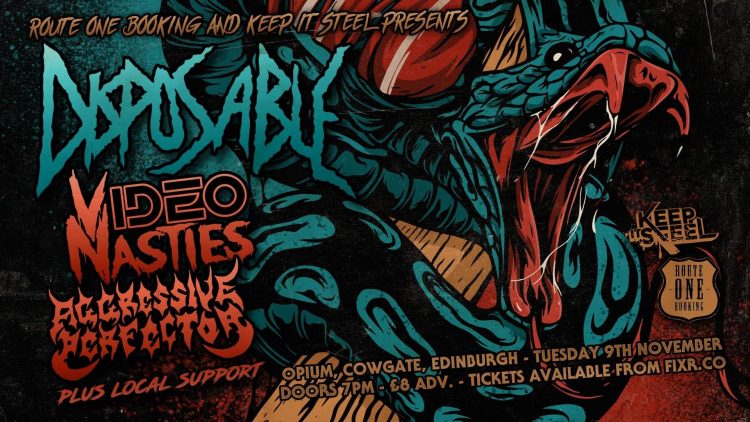 Route One booking and Keep it Steel bring you:

Edinburgh's own angry thrash groove mob Disposable bring you all the in your face steel one could ask for, after over a year of lockdown, we are super excited to have Disposable back headlining the opium stage for a hometown show.

Video Nasties: Following the release of the vinyl reissue of their debut album ‘Dominion’ on APF Records at the start of this month featuring new single 'Draw The Shades’, horror themed, John Carpenter worshipping, metal outfit Video Nasties are gonna set to leave their mark on Opium, Comprised of members from some of Liverpool's finest heavy exports in The Bendal Interlude, SSS, Magpyes and Iron Witch, the quintet that is Video Nasties mixed death metal with punky and thrashy undertones, creating something morbidly macabre and devilishly debauched on their debut record. Picking up universal praise from the likes of Kerrang, Metal Hammer, Metal Sucks, Decibel Magazine, Metal Injection, Zero Tolerance, Total Guitar and Metal Heads Magazine.