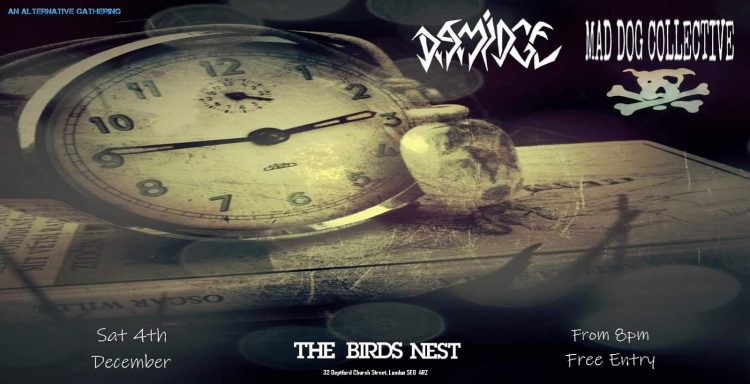 We are well happy to bring you two local legends for a pre-Xmas mash up.

Damidge
South London Based Punk Band with a Spacey twist.
Damidge was formed by frontman Al Damidge in South London in 1987 and their debut album followed in 1994, but wasn't released for years due to them breaking up.
Al then reformed the band in 2013 and they're still going, including releasing an EP in 2016.
https://www.facebook.com/damidge
https://damidge.bandcamp.com
https://www.youtube.com/channel/UCxBV5XTSz_8ts-9H6GhFiTw

Mad Dog Collective
We are a pikey punk ska band, sometimes controversial, sometimes off key but always up for it!!
We are a ragtag collective of misfits n rebels fighting against the corrupt system and supporting oppressed people everywhere.
https://www.facebook.com/MadDogCollective
https://maddogcollective.bandcamp.com/releases
https://www.youtube.com/results?search_query=mad+dog+collective