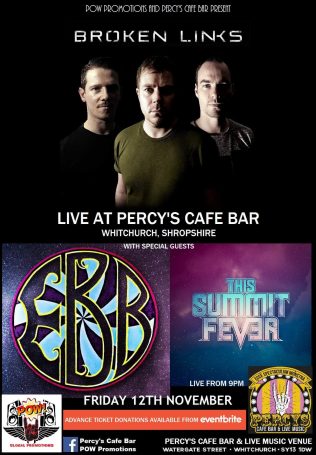 BROKEN LINKS express melodic and hook laden alternative rock that is dark, haunting and potent. Loaded with atmospheric guitars, melancholic vocals and electronic soundscapes. Originally drawing influences from an assortment of areas stretching from the Manic Street Preachers, Depeche Mode, and Nine Inch Nails to The Chemical Brothers and Massive Attack, BROKEN LINKS have meticulously formulated a hugely unique sound that is stacked with integrity and is utterly all-conquering.

BROKEN LINKS have built a formidable and loyal fanbase following the self-release of three EPs and three albums, and by playing shows with the likes of British Sea Power, The Boxer Rebellion, InMe, My Vitriol, and The Chameleons in the UK, Germany, Austria, Belgium, Czech Republic, and Italy.

This year, BROKEN LINKS return with their fiery new album, Conflict::States. The album is an angry declaration aimed at the current state of the world. Mark Lawrence (Vocals & Guitars) explains: “People are living in a world where they think they have choices. There are no choices. We’re on borrowed time. This album is a statement of awareness to all the shit holding society back.” From top to bottom, the album is a heady fusion of goth-electro, post-punk, and pop-rock that takes the listener on a powerful aural experience.

To move away from...

EBB are a 6-piece, genre-defying group of musicians who live within a pagan art collective. Coming from very different social and political backgrounds, they play an eclectic blend of music styles, resulting in prog-rock… sort of.

Formed initially in 2013 as a backing band for the award-winning singer/songwriter Erin Bennett, the group released two albums with Bennett as a solo-artist (ReFlowered (2016) / Post Sexy Post Truth (2018).) Both releases were positively received by UK music press and included a UK-wide tour, several dates supporting Hawkwind as well as a handful of shows in The Netherlands. In late 2018, however, Bennett decided to cease performing as a solo-artist and officially rebranded with the same musicians to form EBB.

In late 2018, the group began work on what will be their debut EP: 'Death & The Maiden.' Marking an obvious change in musical direction, the 6-track record, released on Boudicca Records showcases the band's musical virtuosity as well as Erin’s continually evolving songwriting skill. Once described as being: 'the bastard daughter of King Crimson and Heart,' EBB cite both those artists as well as bands such as Hawkwind, Tool and Rush as being among their influences.

'Death & The Maiden' is a concept album and a perfectly selected sample of songs from EBB's greater conceptual live show. D&M describes the arc of a life struggling with conflicting mental states and, ultimately, resolves into an almost 'enlightened' sense of self-awareness. The opening track 'Dark Lady' features soaring three-part harmonies and synths and expresses a spiritual 'letting go' of things perceived as important. It is followed by 'Throw it all Away' which uses driving bass to further explore the process. 'Suicide', the 3rd track on the album, is a dark and honest look into the graver aspects of the human condition: EBB often introduce this song live by remembering musicians who have taken their own lives. 'So Great A Lover' is a musical segue featuring an excerpt of the poem 'The Great Lover' by Rupert Brooke and is recited by one of EBB's backing singers, Kitty. 'Illusions' offers a guitar-heavy and almost violent beginning then, using the same vocal tune for chorus and verse, the musical arrangement alone lends the lyrics the emotional charge to tell the story. The EP closes with a re-working of the track 'Cold & Still' from Erin’s 'Post Sexy Post Truth' record.

Featuring the nostalgic tones of Hammond and Mellotron, the band have taken a classic approach on 'Death & The Maiden'. Using a jazz-influenced bass style and rich backing vocals this record sits comfortably within the Prog-Rock realm. Bennett's ferocious guitar chops combined with Anna Fraser’s tightly schooled but musical drumming style, give this record a very modern edge. The lyrics, melodies and harmonies pull the whole project together making EBB a unique and riveting band to hear and to see live. Recorded at Boudicca Records' Lodge Studios and mastered by Ed Woods (The Who, The Proclaimers, Idlewild) 'Death & The Maiden' is a promising release by a group who have made it their mission to bring something fresh to the live music scene, which seems increasingly lost in a sea of safe ubiquity.

'...[a] fresh and modern approach to a progressive form of music that should be applauded...' -Fabrications HQ

[Ebb] gave me goosebumps, and I can tell you as a hardened, possibly even jaded live music listener it takes something very special to elicit that reaction from me. -Mark Hoaksey (Editor) Powerplay Magazine (Issue 223)

​‘Death And The Maiden’ packs more wonder into six tracks than a lot of bands do in an entire career..'. -Down The Front Media

​'Death & The Maiden' is centred around the theme of divulging through an array of diverse emotions, and these are brought to life through mesmerising, poignant lyrics, which in turn are transmitted via a threefold of vivid and often heated vocal performances.' -Small Music Scene

​'Not for the faint hearted' - Planet Rock Magazine

This Summit Fever – Stoner Rock from the birthplace of the Industrial Revolution.

This Summit Fever is the musical project of Andy Blackburn. Based in Shropshire, England, Andy has spent the first half of 2020 writing and recording songs alone at home due to the Covid pandemic lock down restrictions.

Times are approximated and may be subject to change

Or donations are welcome at the bar on the night of the event.