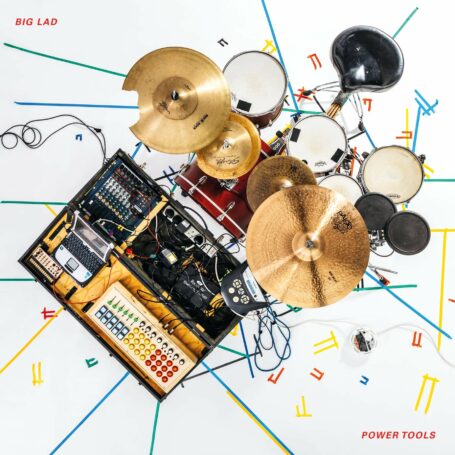 Constructed from the brains and limbs of Wayne Adams and Henri Grimes, Big Lad is difficult to frame in words and perhaps much better served by their actions. Their live show having been continually captured, cropped and chopped over the years since their formation in 2015. The project was rather appropriately founded off the back of a chance email, when Drummer Grimes (formerly Shield Your Eyes) suggested that the duo collaborate on a crossover project, having heard Adams’ vast Breakcore back catalogue. Adams had, somewhat serendipitously, been busy writing a Drum Trigger programme shortly before the email had hit his inbox and he jumped at the chance to test the creation in a practice room. With Grimes strapped into this new system, songs started to appear thick and fast, and Big Lad was swiftly born.

2015’s recorded debut announced their collaboration, consciously marrying the collective excitement of both underground Punk and Electronic subcultures. 2018’s Pro Rock saw Big Lad extend the euphoria of their live show, using primal energy as an antidote against the jargonistic culture of our present.

After a year away from the heat of the stage lights, 2021 sees the triumphant return of the duo, announcing a brand new LP titled Power Tools. It’s a collection that sits as an unashamed monument, chiselled and stripped back to present the raw strength of what Big Lad has become. The results range from more familiar high octane tracks that nod to history of the rave community, to more
brooding moments that appear (and vanish) like the ghosts of warehouses long since vacated. It is not a surprise to discover the digital remnants of Big Lad’s appearances at celebrated festivals
such as Arctangent, Supernormal, Raw Power and BANG FACE. Having exploited the lines between inconsistent biology and technological perfection, their circular mess of wires, bodies and
drums is something to be witnessed in the flesh, the surrounding crowd almost always drawn into floor-based apparatus like moths to a flickering flame.