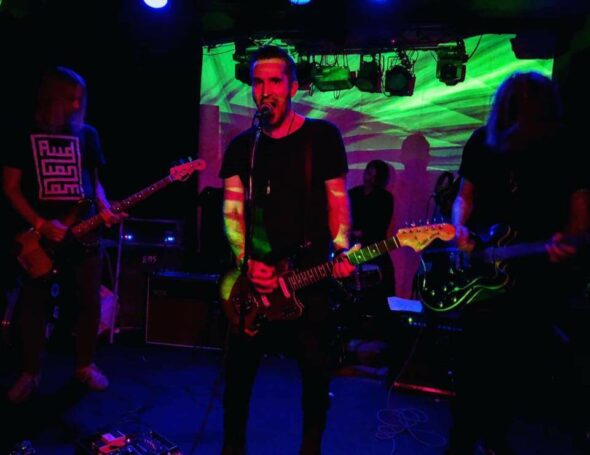 THE JANITORS
Conjuring heavy drones and sinister garage psych freak outs, Stockholm outfit The Janitors have been a formidable presence on the European underground since they formed back in 2004. Channelling the freewheeling spirit of Hawkwind with equal smatterings of Sabbath and Spacemen 3, the band are masters of taking hold of a gnarly fuzzed out groove and beating it within an inch of its life. Probably not for the faint of heart, their druggy wig-outs are totally relentless and unforgiving.
For the uninitiated, perhaps we should turn to the late Hunter S. Thompson who famously wrote: “But the ticket, take the ride.. and if it occasionally gets a little heavier than what you had in mind, well... maybe chalk it up to forced consciousness expansion: Tune in, freak out, get beaten.” Those words serve as a perfectly apt instruction manual - or warning, perhaps - for entering the Janitors nightmarish world.
In November 2020, The Drone machine collective from Stockholm presented their latest offering to the altar of fuzz and drone, the critically acclaimed Noisolation Sessions Vol.1. During 2021 they will, god willing, release a Vol.2 and hopefully a new live studio album.
https://www.facebook.com/thejanitorsofficial