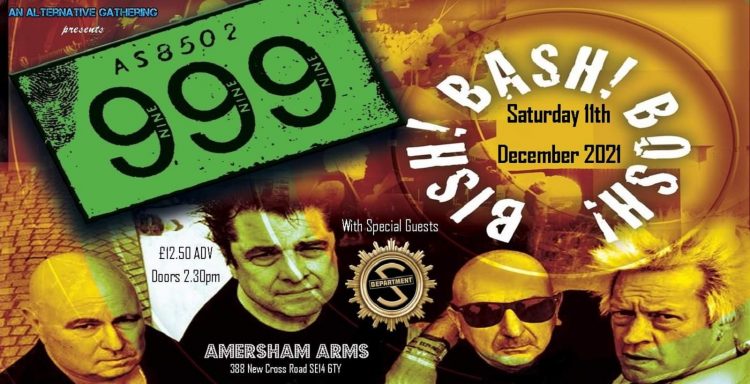 An Alternative Gathering are chuffed to bring 999 back to South London after a gap of 3 years.

999 are an English punk rock band, formed in London in December, 1976. Line-up consists of Nick Cash, Guy Days, Pablo Labritain & Arturo Bassick. 999 celebrated their first 40 years anniversary on 5th December 2016. The reason for their longevity is not airplay, massive publicity, hype or even a major recording deal but word of mouth and that "word of mouth" now extends to nearly every country on earth.

The frenzy and raw energy of the early days were captured by their debut single “I’m Alive" on the bands own Labritain label and sold well enough to become a minor hit. Next through their association with United Artists records the second and third singles, “Nasty Nasty” and the now classic “Emergency” were released both scaling the lower reaches of the charts and confirming 999 to be one of the major forces in the British New Wave Movement.

The first album titled simply “999” was released and was greeted with impressive sales and critical acclaim. Extensive touring took them throughout Britain and Europe where they now encountered full houses. The second album "Separates" was released and immediately the single "Homicide" leapt straight into the UK top forty without any Radio airplay and was banned by the BBC and most radio stations.

Early 1979 saw the band embarking on their first U.S. tour, which was an achievement in itself, as they were still without a record deal in America at the time. Response to the band was ecstatic, all the venues being filled and import albums being sold out in a rush of enthusiasm. The band were immediately booked for a return trip.

Since leaving United Artists in 1979 999 have recorded another twelve albums. Jon Watson was replaced in 1986 on bass by Danny Palmer and subsequently by Arturo Bassick in 1991. To date the band have completed 17 U.S. tours, played over 130 London gigs, more than 50 UK tours and over 30 European tours.

They released their last album ‘Bish Bash Bosh‘ in 2020.

Formed from the ashes of faux ska band Guns For Hire, and named after a tv detective spoof, London's Department S released three singles between 1980 and 1981 including "Is Vic There? ","Going Left Right" and "I Want" on Stiff Records. The band appeared on Top of the Pops and a Smash Hits cover. They were on the brink of a break out. They recorded an album called "Sub-Stance" with producer David Tickle who engineered Blondie's "Parallel Lines".

The band experienced some line-up changes and a shift in musical styles. Then Stiff decided to stiff the band and didn't release the record. Increased friction between band members and lack of management support was the final undoing.

Dept S reformed in 2007 and have released an EP and two albums since - the last one being the acclaimed "When All Is Said And All Is Done" in 2016 and have played 100's of shows across the UK and Europe since.

And With Support From

Screaming Dead
A punk rock band from Cheltenham formed in 1980, who have often been characterized as "horror punk". They released several singles and EPs with indie chart success, before splitting up in 1985. They reformed in 1997; disbanded again in 1999; and reformed in 2014 and have played all over the world.
https://www.facebook.com/officialscreamingdead

Penny Blood
Brighton punk/post punk.
Penny Blood was a term applied to 19th century British fiction publications, usually lurid serial stories, much like our own tales of titillation and turmoil.
Penny Blood are formed with ex members of Pig City Angels and Peter & The Test Tube Babies. Yes they are a supergroup.
https://www.facebook.com/PennyBloods
https://jsntgmnew.bandcamp.com/track/penny-blood-feeding-time

Sinful Maggie
Formed in 2015 Sinful Maggie set out to show people that you could have a punk band with an accordion and not play Folk Gypsy or Celtic Punk.
Based in Dorset, the band built their fan base in the Bournemouth punk scene but have since shared bills with Maid of Ace, The Rumjacks, The Real McKenzies, Buzzcocks and Slaves.
Often likened to early Rancid with a bit of The Clash and some Dropkick Murphys to boot!
https://www.facebook.com/sinfulmaggie

The Meffs
"Noisy. Under-produced. And most definitely ‘in the room’. Glorious punk in the great tradition of British political/punk acts.
And if there was ever a time when society needed the kids to make some noise, it is now."
https://www.facebook.com/Themeffsuk

Spitting Feathers
In ya face cheese Disco Glam punk. Glunk with added Bisto. Actually we ran out of Bisto so we are running on high octane rocket fuel!
What we do is take mostly 1970s pop songs and do our own very stripped down and garagy primitive take on them.
https://www.facebook.com/flocksters
https://www.youtube.com/channel/UCvQadCR5mVjp1WM6G-FKOWw

Parking: Amersham Road after 7pm (Red Route), Free anytime further up hill, Amersham Vale (by station across road) anytime if there are spaces!